Who doesn’t like to make the same quilt twice? Most of us…. But this is my third time making the Fox & Friends equilateral triangle quilt. This quilt will be the sample quilt brought to class when I teach at the Kincardine Sunset Quilters’ Guild this fall. It was just as much fun making this time as […]

On Wednesday, I announced the upcoming Dog Gone Cute Quilt Along Blog Hop. And the response has been overwhelming! Which is a good thing. The Quilt Along starts in September and the Blog Hop begins in October. There will be a linky party in November. So it’s certainly not to late to join in! Dog Gone Cute mock up drawn in […]

Whether you are a modern or traditional quilter – or somewhere in between – one thing we can ALL agree on is that we share a love of fabric. When Rita of Fabric Please! approached me about putting together a fat quarter blogger bundle for a tutorial and a giveaway, I was like… YES, PLEASE! […]

It was back in January that I first posted about the Elephant Parade and my inspiration for this cute quilt. This was quickly followed up with an Elephant Parade Quilt Along, which many of you participated in and helped to cheer us on as we paraded through until March. A couple of weeks ago I showed […]

This little quilt makes me so happy! It was sure pretty quick to put together. Once I figured out how to piece those little bee blocks that is. I used my EQ7 program to work on this design and am so pleased with how much it looks like the EQ7 image. You can read more […]

Those batik strips are still getting sewn up. I had a great time playing around with some strips last Monday. And I guess I couldn’t stop! This time I made a table runner out of some pretty blue and beige Island Batik strips. I am always drawn to those cool blues! The strips were each […] 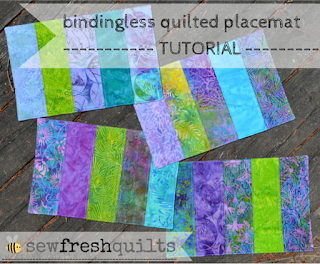 Monday was just one of those days. All I wanted to do was sit and sew! Something simple….. Sew a few strips together and see what comes of it. I rediscovered these batik strips from Island Batik in my stash. The strips were each about 3″ x 10″ and I thought the four groups of […]

99 is a pretty big number. But it looks like it was well worth all the hard work. I shared a few posts previously here, here and here, updating my progress on the making of these blocks of scrappy Kona Cotton goodness. 99 bottles of beer on the wall. 99 bottles of beer…. Truthfully, I was getting kind of […]

After all these weeks of piecing the blocks… And fixing a few last minute mistakes… Hillside Houses is finished! I lucked out when looking for what to use for the backing. Wanting to use some of my older stashed fabrics, I found a few yards of this pretty clam shell print called Yoshiko from Blank […]

Back in April 2014, I designed a quilted table setting for a guest post on Sew Can She.  I really liked this design, which uses equilateral triangles to make place mats, a long runner, and a hexagon table topper. Each Place Mat finishes at 20″ x 12″ Hexagonal Table Topper finishes at 30″ across at […]

Get blog updates sent straight to your inbox